FPP for the HAM

I have finally worked out all the HEX coding in the FPP program for the PRM80. This has allowed me to create a version of FPP that matches the firmware I modified several months ago.

The frequency you need for the modified firmware can now be directly entered:

There has also been some band edge changes:

And last but not least, I have enabled the hidden bands of K1 (174-210Mhz) and K2 (200 - 220Mhz) in both a local and a remote variant. please email me if you have suggestions for these bands in the firmware. 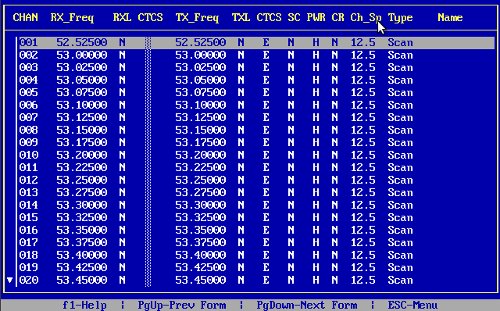 This screenshot has been taken with DOSBox. This is not an edited image

Please note: This version of FPP will only work with the modified firmware.

Sure it will read and write to a radio with normal firmware but weird things will happen.

Download the files and load them into your FPP's BIN folder and have fun…. An even better idea is to save the files in a BIN2 folder or similar under the same PRM80 folder you already have as you can access your origional jobs without killing the unmodified version. Download FPP Ham

To get the firmware, go here: Firmware