I have built a small repeater into a briefcase for using as an emergency station or for field days. It was recently used in the Snowy Hydro challenge. It uses the frequencies of 438.575Mhz with a -5Mhz offset plus a VHF link which can be set at 146.550 or 147.500Mhz. The repeater has an EIRP of 5W and the link 2.5W. These power levels were chosen to conserve battery power.

The UHF transmitter and receiver are headless PRM8030's T Bands. The VHF link is a Tait T500. A small dumb controller is between all the radios to correct the audio levels, give the UHF section a tail and give both Transmitters a 10min timeout. The diplexer is a 6 cavity ??? Unit. It was built in a day out of leftovers from other projects and junk. For example the TX radio refuses to receive with any sensitivity and the receiving radio refuses to lock the VCO on TX. The T500 did nothing and the controller started life as a DSE Funway kit from when I was about 12 years old. The complete repeater with antenna case minus batteries. Note the antenna mounts on either side of the case. The internals. UHF TX on top left, Cavities top right, VHF link radio bottom left and UHF RX bottom right. The controller circuid board is obscured from view, and held down by the link radio! The vacant bnc plug in the middle of the top of the case was intended to connect to a UHF CB transmitter so the race activity could be heard by the SES and the owner of Kanchoban station. It never made it, and I ran out of room in the case. 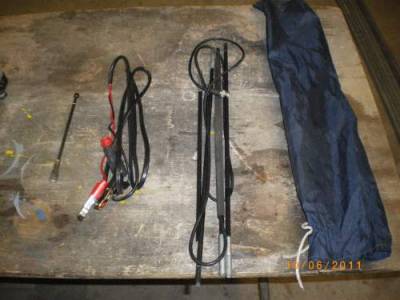 The antenna case contents. Telescopic whip for VHF antenna on left, then the power cable, then a half wave coaxial dipole on a collapsable tent mast to the right. These secure to either side of the case.

The antenna for the VHF links is an ex-CFA polar antenna with an extendable TV “bunny ears” whip. Fully extended it resonates at 147MHz. The UHF antenna is currently a 1/4wave groundplane antenna mounted on top of a 5' CB whip to give it some verticle separation from the VHF antenna. I have intentions of improving this.

It has been improved on. It is now a dome tent antenna mast, collapsable, with a 1/2 wave coaxial dipole on the top. 4 sections gives a mast 1.2M above the case.

Apart from the UHF antenna and battery, the whole lot is stored in the briefcase.

Improvements to come are:

If anyone has had a look at the WICEN NSW website, they would have seen an article on a Coaxial Dipole. One has been constructed for this repeater. It has been built onto colapsable pieces of an old Dome tent pole. There has been a marked improvement on the 1/4 wave ground plane it had.

There has been some improvements to the brains of the system… Using a PICAXE 08m and some code from VK6HV, I have given the UHF side of things an ID in morse code (VK3SMB/P) and a Timeout timer with Morse warning. I was also able to give a fan out control pin.

And lastly, I have given the PA some much needed cooling. There has been a fan mounted onto the fins of the PRM80 transmitter and is triggered with the PTT with the help of the 08m controller.